Cloisonné, also called enamel ware, is the combination arts of porcelain and metal. The earliest extant Cloisonné was made in the Yuan Dynasty (1271-1368). The best was made during the Xuande period (1426-1456) of the Ming Dynasty. During the Jingtai period (1426-1456) of the Ming Dynasty, it became more popular, handicraftsmen found dark-blue enamel that gave Cloisonné a gorgeous, solemn look, the technique turned to be quite mature. As the blue color was mostly used, so it is called Jingtai blue, and this name is still used today. Cloisonné is the technique of creating designs on metal vessels with colored-glass paste placed within enclosures made of copper or bronze wires, which have been bent or hammered into the desired pattern. Known as Cloisonné, the enclosures generally are either pasted or soldered onto the metal body. The glass paste, or enamel, is colored with metallic oxide and painted into the contained areas of the design. The vessel is usually fired at a relatively low temperature, about 800°C. Enamels commonly shrink after firing, and the process is repeated several times to fill in the designs. Once this process is complete, the surface of the vessel is rubbed until the edges of the Cloisonné are visible. They are then gilded, often on the edges, in the interior, and on the base.The making of Cloisonné integrates bronze and porcelain, working skills, traditional painting and etching. It is the pinnacle of traditional Chinese handicraft. Cloisonné has another name "inlaid enamel", which refers to the unique technique of the combination of porcelain and bronze. Beijing is a city famous for its Cloisonné making. 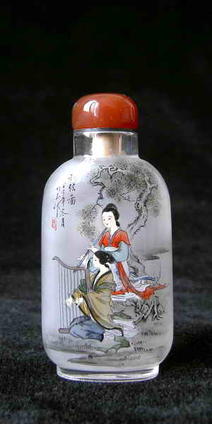 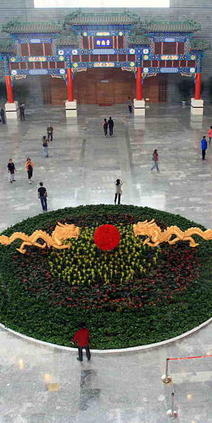 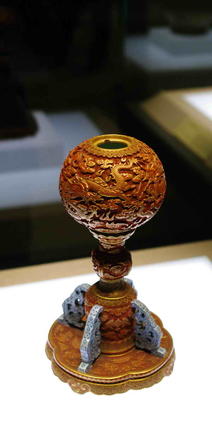