Peking Duck, also known as Beijing Roast Duck (Beijing Kaoya), is one of China’s most famous delicacies. Climbing the Great Wall, watching the Peking Opera and savoring the Peking Duck are the three things that first time visitors shouldn’t miss in Beijing. The traditional method of preparing Peking Duck has a history of more than hundreds of years and enjoys a famous reputation home and abroad. Peking Duck is now considered a national dish of China, but more popular in Beijing.

Peking Duck is famous for its thin and crispy skin, with authentic versions of dish serving mostly the skin and meat, sliced in front of the diners by the cook. Before taking up the menu, it is better to know how the Peking Duck is made and served. The ducks are raised for the sole purpose of making the food. Forced-fed, they are kept in cages to keep them from moving around, so as to fatten them up and make the meat comparably tender. Ducks bred specially for the dish are slaughtered after 65 days and seasoned before being roasted in a closed or hang oven. Peking Duck is processed in several steps: first the ducks are rubbed with spices, salt, sugar and then are left to dry for 24 hours. Second they are roasted in an oven, or hung over the fire till they become brown with grease perspiring outside and have a nice odor. Peking Duck is always served in well-cut slices, the whole duck is often sliced into 120 pieces and every piece has to be perfect with the complete layers of meat. Peking Duck is usually served with thin steamed pancakes, scallion and cucumber strips, sweet bean sauce, sugar and plum sauce.

How to eat Peking Duck

The cooked Peking Duck is traditionally sliced in front of the diners and served in three stages. First, the skin is served for dipping in sugar or plum sauce. Then the meat is served with thin steamed pancakes, scallion and sweet bean sauce. Several vegetable dishes are provided to accompany the meat, typically cucumber and turnip strips. Pick up one piece of the thin pancakes either by the chopsticks or hand, use the duck meat or skin to smear the bean sauce onto the pancake. Then place several strips of scallion and cucumber on the pancake, wrap up the pancake and eat by chopsticks or even hand. It is similar to eating the Mexican Tortilla. The last stage is to serve the broth made of duck bone and vegetables which is normally included in the bill.

Quanjude Peking Duck Restaurant is one of the gourmet dishes enjoying “China’s Time-honored Brands”.It was founded in 1864 which is one of the most famous catering businesses in China and has been granted various distinctions like “Famous Trademark of China” and “International Gold Award for Quality Management” etc. Quanjude Roast Duck is the firm’s signature dish. More than 100 years ago, Mr. Yang Quanren, founder of Quanjude invited imperial chef Master Sun from the Qing imperial court, who helped him develop the hung oven to roast ducks by using completely new processing techniques-something unique to Quanjude.Quanjude roast ducks are made with choice materials. Force-fed ducks no older than 55 days are always selected, with strict control over breed ducks, feed composition and rearing methods, ensuring meat tenderness and freshness. After dozens of procedures, slaughtered ducks are ready for roasting in the unique Quanjude style. The special blazing-fire hung oven with fruit tree firewood is still used to guarantee the quality of each roast duck today.Crispy skin, tender and non-greasy meat is the distinctive taste of Quanjude Roast Duck. The crispy skin instantly melts in the mouth, with no tough things left behind. When the roast duck is taken out from the oven, a Quanjude chef will slice it into pieces in front of the diners. The slicing skills are so excellent that they are considered as a visual treat to everyone present. Quanjude Roast Duck is unarguably one of the best Chinese gourmet dishes combining rich nutrition, culture and fantastic taste.When Chinese people talk about Peking Duck, the first brand comes to their minds is always Quanjude.

Bianyifang is the oldest Peking Duck Restaurant in Beijing which was established in 1416 during the Ming Dynasty (1368-1644). The roasted duck in Bianyifang is crispy, fragrant and deliciouswith a reasonable price. There are generally two methods of roasting Peking Duck. One is by hanging the duck and roasting it which is employed by most the Peking Duck restaurants in Beijing such as Quanjude. The duck is cleaned, defeathered, cured and placed directly into the oven to roast. The other method involves braising the duck, in which the bird is cleaned, defeathered, gutted and filled with a special stock. In this way, the roasted duck maintains a good form, with skin that sticks to the meat and gives off a glowing luster. The outside is crispy and the inside is juicy and tender, with a luscious flavor and a long-lasting aftertaste. Bianyifang has established its name by using the second method which is seldom used now. Bianyifang makes full use of every part of the duck and creates dishes with their own special flavor, presenting a scrumptious duck feat for dinners.

Dadong Peking Duck Restaurant was found in 1985, named after the General Manage Dong Zhenxiang, who is often greeted by friends as Dadong (Senior Dong). It is supposed to be the most famous place to have the Peking Duck in Beijing, especially for the high-end customers. Dadong is usually packed with both locals and westerners. It is pretty hard to get a table without booking in advance. Very often dinners have to wait for about 30 minutes before having a bite of the bird’s glossy deep red skin and smell its mouth-watering fragrance wafting through the air. Not only they are delicious, these ducks are low-fat and healthy-described as “crispy but not oily” with a tasty, juicy inside, and crispy outside.The dishes in Dadong’s menu are listed in Chinese, English and Japanese with pictures, dinners can order with reference of them. Each table provides detailed instructions on how to eat their roast ducks. 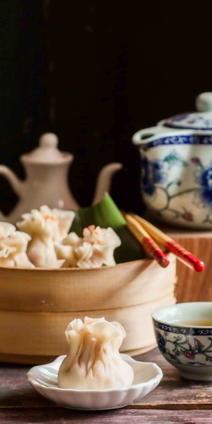