The food prepared for the emperor in the past is known as Imperial Cuisine. When the emperors of Qing Dynasty had a meal, there was always a table for him to dine alone except for during banquets. Each soup or dish was covered and only when the emperor began to eat, would the cover be removed. There were special departments in charge of various kinds of food. Different kinds of tea were served by the Imperial Tea House; while the Pastry House made a variety of pastries; dinner dishes were served by the Imperial Kitchen. The Qing Emperor used to have two meals a day. In winter, breakfast was served at 6:00 am or 7:00 am; dinner was served between 12:00 to 14:00 and the evening snack was served at about 6:00 pm. Dishes for preparing each meal were all listed and the list was submitted to the officials of each department. Cooking methods included Manchu and Han styles, as well as southern and the northern cooking methods. Imperial cuisine features the essences of famous dishes from all over the country. Color, fragrance and taste are all important elements of imperial dishes. Imperial dishes have an additional characteristic that each dish has an auspicious or special name. Examples of such dishes include “Jade Phoenix Returns”, “the Dragon Boat Fish”, “the Phoenix in the Nest”, “Evergreen with Clear Soup”, “Bamboo Fungus with Longjing Tea” and “Golden Fried Rolls” etc.

The Beihai Fangshan Restaurant is located inside Beihai Park, where Empress Dowager Cixi (1835-1908) used to take her meals after sightseeing in the park. The food made in the Qing Palace for the emperors was called imperial food, so a restaurant operating outside the palace making and selling imperial food was only an imitation (in Chinese, Fangshan). The restaurants’ popular food is cooked wheaten products, such as baked sesame seed cakes with fried minced-meat filling, pastries shaped like apple, peach, fingered citron, and lucky rolls. The pastries included steamed corn-flour cake, rolls of kidney bean flour, and mashed pea cake, which were all favorites of Empress Dowager Cixi. The most sumptuous food at Fangshan Restaurant was their Manchu and Han banquet. After seated the guests would be served the pastry first and then the Three-Course Tea, finally the main course which usually consists of one hundred and eight dishes. The feast would last for three days with two meals in one day. These dishes have the blended flavors of the Beijing cuisine and palace dishes. Fangshan offers a selection of complete set-meals and fixed banquets ranging from 35$ to 980 $ per person depending on the selections. The menu combines imperial recipes, traditional Beijing favorites and modern creations. Guests who reserve a table on the second floor can enjoy a stunning view of the Beihai Park Lake. The restaurants’ traditional Qing Dynasty atmosphere, where the waiters and waitresses wear elaborate silk gowns and delicate platform shoes, could bring guests back to an imperial-style banquet. 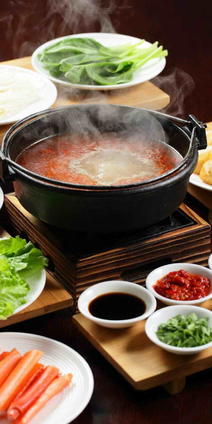