The Theory of the Five Elements, Wu Xing in Chinese, often shorten to Five Elements, is the concept in Chinese philosophy conceiving the world as dynamic states, or phases of constant change. It is a fivefold conceptual scheme that many traditional Chinese fields used to explain a wide array of phenomena, from cosmic cycles to the interaction between internal organs, and from the succession of political regimes to the properties of medicinal drugs. The Five Elements are Wood (Mu), Fire (Huo), Earth (Tu), Metal (Jin) and Water (Shui). This order of presentation is known as the “mutual generating” (Sheng) sequence. In the order of “mutual controlling” (Ke), they are Wood, Earth, Water, Fire, and Metal.

According to the Five Elements, the basic substances of the material are Wood, Fire, Earth, Metal and Water. All material things are made of a single or a combination of them, since they are the fundamental components. All Five Elements are equally important and should form a balance, while being in constant move and cyclical change of phases. Each phase’s peak already consists of its decline, then forwarding the prior received energy from one element to the following element.

The generating (sheng) or controlling (ke) element is building up the energy to its own peak, before the decline starts again. This interactive process is being constantly repeated, hence forming a never ending, though balanced circle. Not only time changes things, but since everything changes within itself anyway. The Theory of the Five Elements is simply an observation of natural, creative changes; and it is the natural world confirming that all forces and energies in nature can be in constant smooth and harmonious transition from one phase to another, like one season becomes the next. Each existing material, combined of parts of the Five Elements, shows a predomination of one of the Five Elements and is assigned an abstract generalization, hence can be classified accordingly.

Grandparent - Grandchild relationship: the controlling cycle provides for a check and balance system among all of the elements.

Controlling: one element suppresses, controls, dominates, overcomes or weakens another element, preventing it from establishing its power. 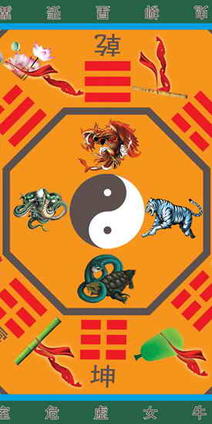